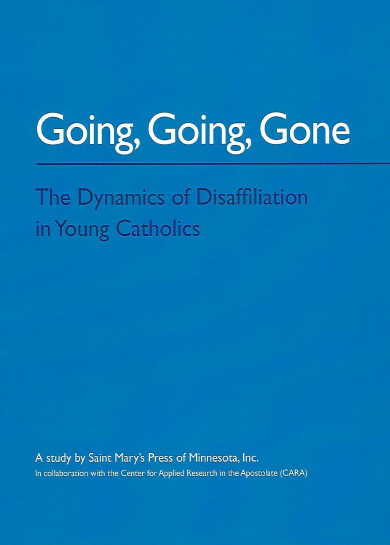 The full study is available from Amazon and St. Mary's Press

Going, Going, Gone: The Dynamics of Disaffiliation in Young Catholics (ages 15-25) is a study in 2017 by Saint Mary's Press of Minnesota in collaboration with the Center for Applied Research in the Apostolate (CARA).

Here is the opening statement in the Executive Summary:

'Disaffiliation from the Church is largely a thoughtful, conscious, intentional choice made by young people in a secularized society where faith and religious practice are seen as one option among many.

'It's a dynamic process that unfolds over time and after a series of experiences or considerable thought. It happens one chip at a time until finally the last chip breaks off a big chunk and one finds oneself 'done.'

'An accumulation of unresolved discrepancies ultimately lead to the conclusion that 'none of it makes sense' or 'I just don't buy it anymore' or 'why stay?'

'Many disaffiliated youth and young adults report feeling 'free' and 'relieved' when they reach this point of opting out.'

'It started to happen around the time there was the whole issues with LGBT people being stigmatized. I went to a public school, buts the area was predominately Catholic, so the issue as the people I went to school with were using Catholicism as a reason to say that people who are LGBT should't have rights.'

'My doubts about being Catholic, guessing it happened a little bit before high school. It was just like the feeling of not feeling like you are prt of something because sometimes you have these people that are extremely religious and then they become extremely hypocritical. And they think they are better than everybody else. But they do bad things and it's, like, how could you be part of that?'

No choice as child

'Catholicism was forced on me as a young child. It was not something that I ever wanted to do. It was just something we were forced to go to.'

'The original root cause of leaving would have been watching my whole mother's family, on my mother's side, pray for my grandpa's lung cancer And everyone is praying for him, probably over 150 people. Personally praying for him and still there was nothing done to help him and that was my first skepticism.'

'I don't know if Jesus was a real person. It's not that I don't believe. I'm just not sure about it.'

'The end of high school, I didn't doubt it, but halfway through college I'd say is when it happened. I just sort of fell out of it.'

'I was always questioning and I would always bring things up. It didn't quite make mjuch sense to me and I never felt like I was receiving satisfactory answers from my CCD teachers.'

'I have always been very smart and I was always studious. But as I started to enjoy math and science more, I just realized the discrepancy between science and religion, I guess that was the shaking point. That pushed me away from the church a big more because of the belief in science that really didn't stack up with religion as far as agreeing with each other.'

'When I reflect back, I think my initial doubts began with my childhood diabetes. I would always ask, Why me? Why would he let that happen to somebody who has been going to church religiously and doing everything they were supposed to be doing?'

'Around the age of 16 or 17, I began to do my own thinking and research. It didn't seem true to me. I don't believe that someone was swallowed by a whale and then came out, or was in a lion's den, or the whole earth was flooded and they put two of every animal on a boat. These stories seems a little juvenile.'

'I began to realize there are so many other religions, each teaching something a big different. Who is to say this one is right and that one is wrong. Maybe, I thought, the truth is a combination of religions.'

'It's not that I don't believe. I'm not sure about it. Maybe there's something out there. I do believe that everything happens for a reason, but as for God and all that stuff, I don't necessarily believe all that.'

'I consider myself a man of science and I look for proof of things. And if one day there was some undeniable proof for something to change my views, then I can firmly see myself believing in something else. But right now, I just don't.'

'Presently I don't really have a label for what my beliefs are. The closest thing would be agnostic, because you do believe something is out there – I just don't know what it is. I don't identify with atheist because I do believe that there is something more.'

Just fell out of it

'The end of high school, I didn't doubt it, but halfway through college I'd say is when it happened. I just sort of fell out of it.'

MORE INTERVIEWS
Eighty-three interviews like this have been completed, and more than a hundred more are planned, to help improve communication with the post-Christian generation.
About Street Interviews >VIDEO 1 - Purpose of life >VIDEO 2 - About the Bible >VIDEO 3 - Christian words >AUDIO A - About God >AUDIO B - About Bible >
< BackTopNext >
EXPLORE THIS SITE
Facts on churches and culture